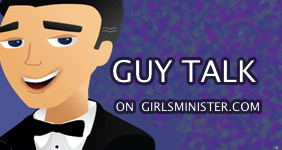 A couple of weeks ago I had the opportunity to be a conference leader for Lifeway’s Girls Ministry Forum. The conference I was given was to talk about “working with guys on a church staff”. At first I was supposed to lead this with one of the guys from our staff, but the forum fell on the same weekend as our guys retreat so I knew that would not be happening. So I sat down to prepare for this conference, and realized that video would be a great tool in documenting some clips from these awesome guys I have served almost 9 years with. However, as I sat down in these interviews, I became aware of how important some of these truths were for me to hear personally and then for my girls ministry friends and youth workers. So I have received permission from them to repost those videos here on girlsminister.com. Thanks so much guys! Today is video that comes from my Senior Pastor. It’s his debut here on girlsminister.com and I’m excited that you get to meet him. He has some great things to say about roles, gifting, and boundaries that need to be in place where both genders are involved. Thanks Mike!